Prayer Of The Destitute, Judy Olang

Psalm 102:1-28, “1 Hear my prayer, O Lord; let my cry for help come to you. Do not hide your face from me when I am in distress. Turn your ear to me; when I call, answer me quickly……. 17 He will respond to the prayer of the destitute; he will not despise their plea.” 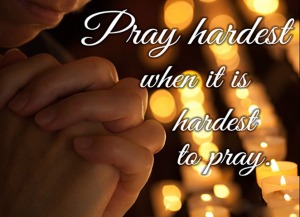 I usually like to share the word from my experiences, I find it easy to share with people what I have already gone through just to encourage and give them energy to keep going because sometimes we feel like we are going through a lot but someone else went through worse and they survived, and so if you hear their story it gives you the oomph to push on. So my devotion today kind of ties up with what my husband shared on “God can” message sometime bac. I am sure we have all prayed a similar prayer like the one above in Psalm 102 and there are times it did feels like God never answered. Have you ever prayed for something for years and years and then you prayed with someone about the same thing for God to open those doors for that someone and it happened within hours or a couple of days or weeks or just months? And here you are, been praying for years and years and nothing? END_OF_DOCUMENT_TOKEN_TO_BE_REPLACED

His Staff Is Our Comfort , Sarah Susan

Exodus 17:11-13, “11 As long as Moses held up his hands, the Israelites were winning, but whenever he lowered his hands, the Amalekites were winning. 12 When Moses’ hands grew tired, they took a stone and put it under him and he sat on it. Aaron and Hur held his hands up—one on one side, one on the other—so that his hands remained steady till sunset. 13 So Joshua overcame the Amalekites army with the sword.”

Usually people are very tensed in battles, no one knows what the outcome will be…..Their life is in jeopardy…severe danger /hazard …In the battlefield, the men fighting are at the heights of stress and tension/ agony. Ultimate aim is to defeat and destroy the enemy..No matter what …..But the Israelites had great comfort, even in the face of the fierce battle, the savage war that they all were being supported by prayer …What a privilege, it was for the Israelites that they had a leader who was upholding them all in prayer –intercessory prayer…Though all the others were perishing in tension, these people had great source of comfort …. END_OF_DOCUMENT_TOKEN_TO_BE_REPLACED

This entry was posted in All Devos, Encouragement and tagged lift up your hand, Prayer, Psalm 23, Shepherd, Valley.

Luke 22:39-45, “39 Coming out, He went to the Mount of Olives, as He was accustomed, and His disciples also followed Him. …41 And He was withdrawn from them about a stone’s throw, and He knelt down and prayed,…”

The Gospel according to Luke chronicles the ministry of Jesus fueled by His prayer life. Matthew mentions pray (prayer, prayed, praying) at least 19 times, Mark 13 times, John 8 times but Luke 27 times (in the book of Acts by Luke 32 times). Of the 161 mentions of prayers in the NT, 36% (59) times are mentioned by Luke either in reference to Jesus or the apostles. I believe Luke wanted us to see how effective, fervent, consistent prayer of a righteous man avails much. END_OF_DOCUMENT_TOKEN_TO_BE_REPLACED

I love reading about Peter, he was a regular guy like any of us. He had weakness and strengths. Peter was an ordinary fisherman who walked with Jesus. His walk with Christ changed his life and I don’t believe anyone can walk with Christ and not be changed. END_OF_DOCUMENT_TOKEN_TO_BE_REPLACED

The subject of faith is often preached on, taught and abused at the same time. The many faith teachings are more about what God can do for you financially and health wise. And if you’ve listened to the same, be enlightened that there is more to faith than that. Teachings on faith today mostly dwell on the byproducts of faith. We find that often times too many of us have enough faith for breadcrumbs and not enough for a whole loaf, what He has promised. Faith enough to get us by and nothing to challenge us to grow more faith in God. END_OF_DOCUMENT_TOKEN_TO_BE_REPLACED

Who Craves Your Spirit? Part 4of5, Pastor Phil Sessa

Numbers 14:24, “But because my servant Caleb has a different spirit and follows me wholeheartedly, I will bring him into the land he went to, and his descendants will inherit it.”

“I have come to make a difference. I’ve said it, I mean it and now I’m here to represent it.” This quote comes concerning his mission. This person is Evans Olang. When I first met Evans, it was his spirit that stood out to me. END_OF_DOCUMENT_TOKEN_TO_BE_REPLACED

Surrendering Your Will To God’s Will, Pastor Boaz Olang

Mark 14:36, “Abba! Father! All things are possible for Thee; remove this cup from me; yet not what I will, but what thou wilt.”

Shortly before Jesus was betrayed and arrested, He was very distressed and troubled to the point of death. He took His three disciples and led them to a lonely place where He could reveal to them the sad condition of His heart and also pray. He said to them: “My soul is deeply grieved to the point of death; remain here and keep watch” And went a little further to pray and He prayed the prayer quoted above. END_OF_DOCUMENT_TOKEN_TO_BE_REPLACED

My Tweets
He Has Magnified His Word
Create a free website or blog at WordPress.com.